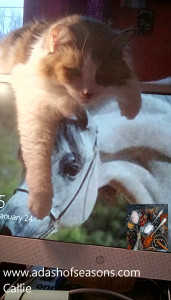 Pet’s Talk: Ep. 4: Callie the Straw Thief 3/26/2020 Traci Kenworth Callie’s day started like any other. She woke up from her nap, hanging upside down on the chair, certain she’d fall and not be able to twist her cat spine in time to avoid a horrid crash. Or maybe that was just a dream from earlier. In any case, she was here to recover a most valuable price: Friskies’ Lobster & Cheese Cat Treats. She threw the ship into reverse and hurtled into space, the princess and the gentle giant lost to the crowd gathered at the ship port. Once into space, she smiled at herself. All in a day’s work. Now, to get these treats home. She set the ship on auto-pilot and headed toward the back chamber. She scooped a handful of the treats and tasted them. Mm. Just as good as she heard. Clients would pay big for them. She tweaked her whiskers. Now, who to call first? The Empire. Or the Rebels? A siren sounded on her ship. Uh-oh, trouble. She sprang for the front and the pilot seat. Out to her rear, a ship fast approached. The Imperial design was a red flag. When her channel opened to The Evil Emperor Midnight, she cast him a grin. “Can I do something for you, Emperor?” He frowned. “You can hand over th